Skip to content
Thinking of Buying a Fuel Water Separator on a Large E-Commerce Site Because It’s Easier & Cheaper?

Thinking of Buying a Fuel Water Separator on a Large E-Commerce Site Because It’s Easier & Cheaper?

In this age of hyper-convenient ecommerce, we all know the ease of buying products on a giant e-tailer such as Amazon or Walmart. With our info already on file and ready to go, it can seem tedious to use a new ecommerce retailer.

1. “Worst Item ever bought from Amazon”

We’ll start off with an example where the person was, eventually, able to get the product to work… eventually.

First off let me say I am an engineer so I would like to think I know what I’m talking about. I have never had an item before give me so much trouble, especially being a fuel/water separator. The first issue was the water drain port broke. I tried to fix it but the rubber on the inside was floating around the clear plastic bowl. This caused a serious fuel leak while driving the boat which could have easily caused a fire. I went ahead and fixed this issue by completely eliminating the threaded valve. The second issue was the plastic bowl came completely off while running, not once but twice! I was WOT and all of a sudden the engine shut off. I immediately went to the piece of junk filter because I had a feeling. Sure enough! The bowl sitting on the bottom… 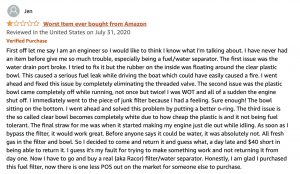 Okay, that first one is bad. But the user was somewhat handy, able to assess the product flaws and heck, it’s just a boat, right? Well this next one was on a houseboat…

Plastic bottom water cup has deformed from exposure to gasoline until it won’t even thread onto the filter. Had this happened while in service, I wouldn’t have a houseboat now. This is a serious design flaw and is a major hazard, I was just lucky. Serious leak between bottom O-ring and water cup, gasoline everywhere. Cleaned it up, re-oiled it and tightened as directed but still leaks profusely. Had to buy a replacement at parts store.

3. “DO NOT BUY, STAY AS FAR AS POSSIBLE, DANGEROUS PRODUCT”

Here’s another example, and as you can see by the headline, this user doesn’t mince words about how much trouble it put him and his boat in.

It is a BIG mistaken for me to order this product, it is event bigger mistaken for me to install these POS into my boat, end up 6 of my brothers and myself Sitting in the middle of nowhere offshore 65 mile out from shore waiting for BoatUS to come to pick us up in the 6feet swell on every 12seconds. Took 14H total to get back to the dock from the time towboat dispatched over the radio…

Wow. 14 hours, waiting for a boat tow from BoatUS Boat Towing. All because of a cheap fuel water separator. Oftentimes one-star reviews can be a little one-sided. But we can see from these examples, these are real reviews of people struggling with horrible water separators.

Here is the rest of this nightmare story:

…I have twin yamaha 250HP, before installed these POS nothing happened, after 35 mile out from shore engine throttle struggling on both side every 5-10 minute, after another ~25 mile continue heading out which ~60 mile from the shore 1 engine give up which i found out the bottom end popped out and cracked on clear case housing, cant reinstall, so we head back, at this point we running 1 engine which more torque applied into 1 engine having issue struggling…

Reinstalled original housing and original fuel water separator no more issue. What have you make and what have you done to us????????

Warning to boater: stay off this product or end up same like us, i dont think i am the only one here having this issue, roll down for previous review. 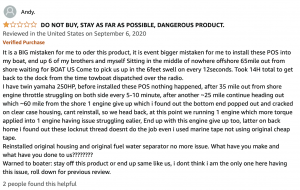 Remember, when you buy from our team here at Clear Flow Filtration Systems, you’re buying right from the source. We saw a need in the marketplace for selling directly to the consumer. Our team is available to answer any of your questions, don’t hesitate to contact us today at info@clearflowsys.com or 971.401.5689.